A couple of weeks ago I played A Way Out and I have to say the game left a really strong impression on me. There are some design elements that I found particularly fascinating and that I’d like to talk about. This post will mostly be spoiler free, but I’ll give a heads up in case I dive into spoilery territory. Directed by Josef Fares (Brothers: A Tale of Two Sons) and developed by Hazelight Studios, the game is a co-op only action narrative game. You can invite a friend and play together from the couch, or you can invite them online and talk over the headset.

The distance between Italy and Sweden doesn’t really allow me and my brother to play games together sitting on the same couch like we used to when we were kids, but the idea of playing this game together was extremely appealing, so we got the game and got ready with out headsets on. We played the entire thing in one single session (yes, we couldn’t really stop) and we both loved it for several reason. I think that Hazelight Studios truly understood what it means to share a narrative experience with someone else, so let’s see why I think they got so many things right.

A Way Out constantly bounces between two rhythms: simultaneous action and alternating action. The first one focuses on giving control to both players (often making use of split-screen), and letting them play together to solve specific problems. This is often the case in puzzle-like sequences where players need to be in separate places or use different objects to make sure they can overcome – together – a shared challenge. As each player is mostly focused on their half of the screen, this creates situations where the players costantly share information and even get excited for glimpsing what the other player is doing from their perspective. The simultaneous gameplay also emerges in situations where both players need to time their input to make sure they perform an action in a coordinated fashion (think counting to three before pressing the same button and being able to slam a door open). Another clever way in which the game makes good use of this system is by making extensive use of inputs in which both players need each other to complete an action, which is something that heavily strengthens their bond.

The other approach – the alternating action – comes in play mostly during combat, and focuses on making sure that both player take part – in turns – to the action shown on screen during some QTE focused scenes. The important element here is that QTEs (which are usually demonized in the industry) are a key element to make sure the feeling of co-op holds in place for both players, since they make sure both of them stay in sync with the action. There are coop games that, during combat sequences, allow players to freely move around and fight at their own pace, but this often leads to one player being done with fighting earlier than the other, or with an overall gameplay scenario that doesn’t feel particularly cinematic. By making sure that the players take part of the same interactive action sequence, with the camera panning from one side to the other of the scene, not only the cinematic structure is kept alive, but the players stay in perfect synergy and can appreciate each other’s skills (or make fun of each other in case things don’t go as smoothly as expected). 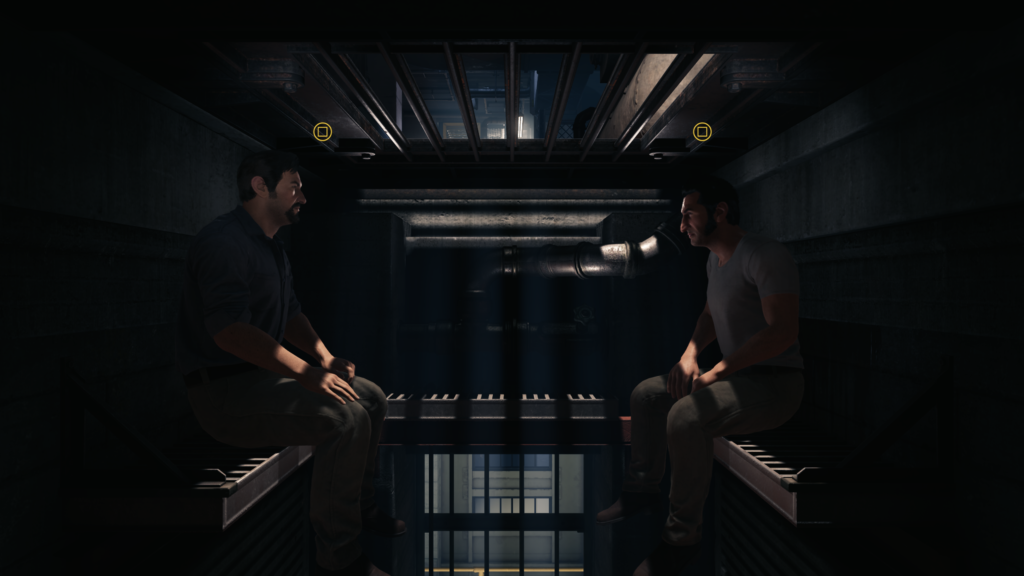 One other reason why I think A Way Out shines is because it really understand that playfulness is fundamental element of a coop experience. Despite of its linearity, the game has many areas in which the players can just explore and play around with different elements of the environment just for pure fun. Many of them involve fun challenges, for instance you can find a dartboard and challenge your friend to see who’s best. Considering that the players are often exploring different areas of the same map, this always creates some “hey, check this out!” moments that always end up being rewarding, funny, and joyful. At some point in the game we were exploring an apartment and I noticed a piano. “Would be great if I could play it”. And the game does allow me to, offering me a simple rhythm mini-game.

“C’mon, stop screwing around and let’s leave!”
“Wait, I am playing the piano, this is really cool!”
“Are you serious, we are supposed to go and you are playing the piano?” – he approaches me “oh, there’s a guitar too!”

As we both start playing the instruments at the same time, the game transitions to a sequence where Vincent and Leo – the game characters – congratulate each other on their music skills and start playing a blues together. It was so surprising, funny, and playful, and this part of the game was made in the name of creating a game capable of triggering joyful moments between the players, our feelings perfectly matching the ones of the characters. 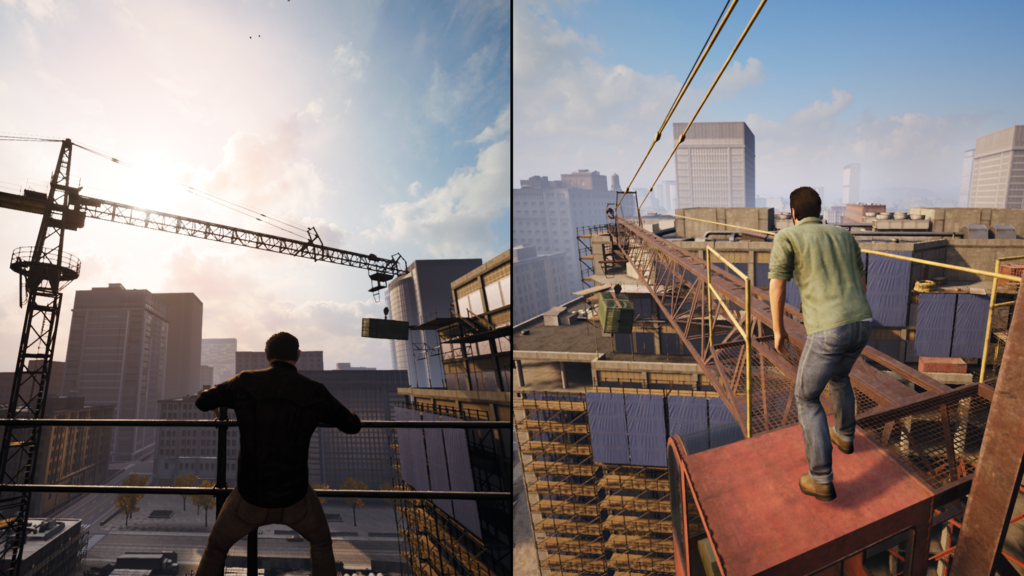 Holy shit, I can see you on top of the crane!

WARNING: here I am moving a bit in a spoilery territory, since I am focusing on the final part of the game. Proceed at your own risk if you haven’t played the game yet.

Let’s start by saying that me and my brother very much loved the ending. We easily allowed ourselves to role-play and follow the script that was given to us because the game never really gave us the impression that we allow to steer the plot through choices. This said, I’ve seen people feeling very disappointed because they just felt like the game picked a forced decision that they wouldn’t have made, so they felt cheated on. I think that this argument is 100% valid. I am not here to say that people shouldn’t feel this way, I can only say I’m sorry it didn’t work out for them. I personally think that in order to carry the emotional punch that Fares had in mind, it was necessary to “force” the events on the player. This tough (and somewhat controversial) decision allows A Way Out to come out of the screen and change the relationship between the players (and not just between the characters). Co-op games often focus on offering mechanics that create interesting gameplay situations for both players, but they rarely strive to create shifting dynamics between them. Once the players understand their roles in the system, it is rare (specifically in co-op games) that the relationship between each other (and not between them and the system) reaches a moment of transformation. The final part of A Way Out is, in my opinion, a design masterclass; not because of its writing but purely because it audaciously touches specific chords that alter the way the players see each other while they are playing. It is easy to just look at this shift from a narrative perspective and feel somewhat betrayed, but the point here is that this decision allows the game to transform the feelings of the players by altering their relationship. Once again, easier to appreciate this if you played the game accepting that someone gave a specific script for you to follow, which is the way we approached the entire experience.

Me and my brother played the final part of the game in full silence. We couldn’t really believe where the game pushed us and we both felt hurt. As stupid as this might sound, it was a deeply moving realization, something that no other co-op game managed to do before. This specifically worked for A Way Out because of its strong narrative component that transcended the pure gameplay system and built and by focusing on strengthening the character’s relationship, it nurtured the one between the players. It is something so unique and rare that I struggle not to feel amazed by the incredible work pulled off by Fares and Hazelight Studios. 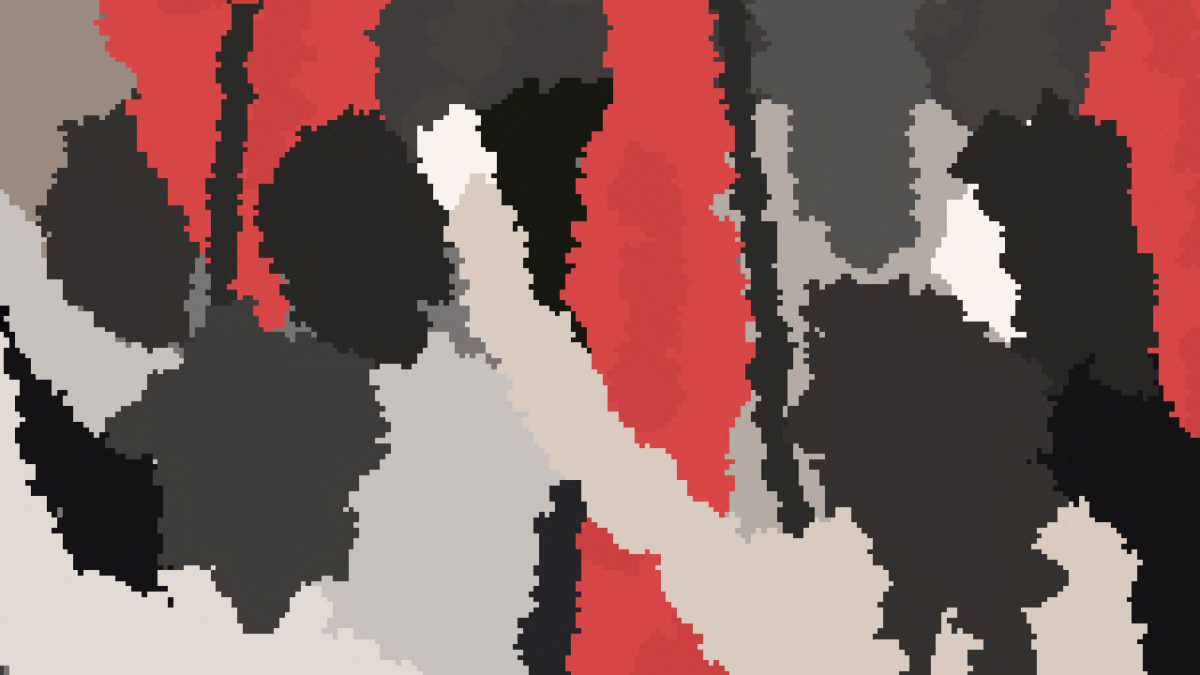 On the 40th anniversary of Peppino Impastato's death, I write some form of post-mortem of my short game 1977: Radio Aut. 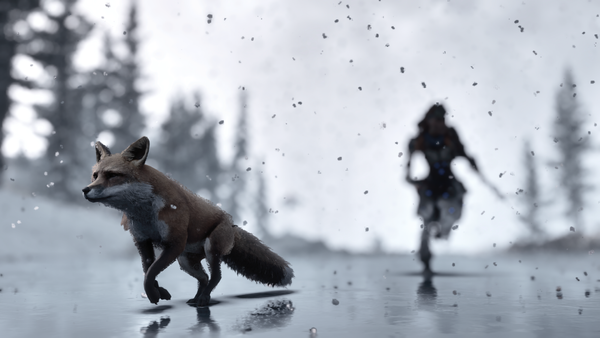 An in-depth analysis of the wildlife in Horizon Zero Dawn, understanding how it was entirely created to serve the player while, but heavily lacking of agency and self-determination.