It’s a couple of months now that me and Michelle are not eating animal-based products. We’re trying our best to fix our clothing habits as well, but we’re slowly improving. Today I’m gonna focus on the eating aspect of being vegan.

DON’T BE A DICK: despite what TV shows and social media want you to think, the majority of vegans are perfectly respectful people that are fine with the fact that you’re eating animals. Veganism is not an extremism. Be respectful to friends and family members who decided to follow this lifestyle. You don’t have to convince them that they’re wrong the same way as they don’t try to convince you that you are. Different people have different sensibilities, and that’s fine.

Some info about myself:

So, this is some info that I think can help you position yourself in a specific way if compared to my situation. Now one key-point:

Many people tell me “I’m not going vegan because animals will be abused anyway”. I think this is a bullshit argument because you’re not responsible for the entire world, but for your own actions. If sexism is rampant, it doesn’t mean I should be sexist “because things will never change”. I do my best to live a good and respectful life. I want to be proud of myself for how I live on this floating rock. Yes, people will keep slaughtering and eating animals, but you won’t, and you’ll be proud of it (if you care, that is). 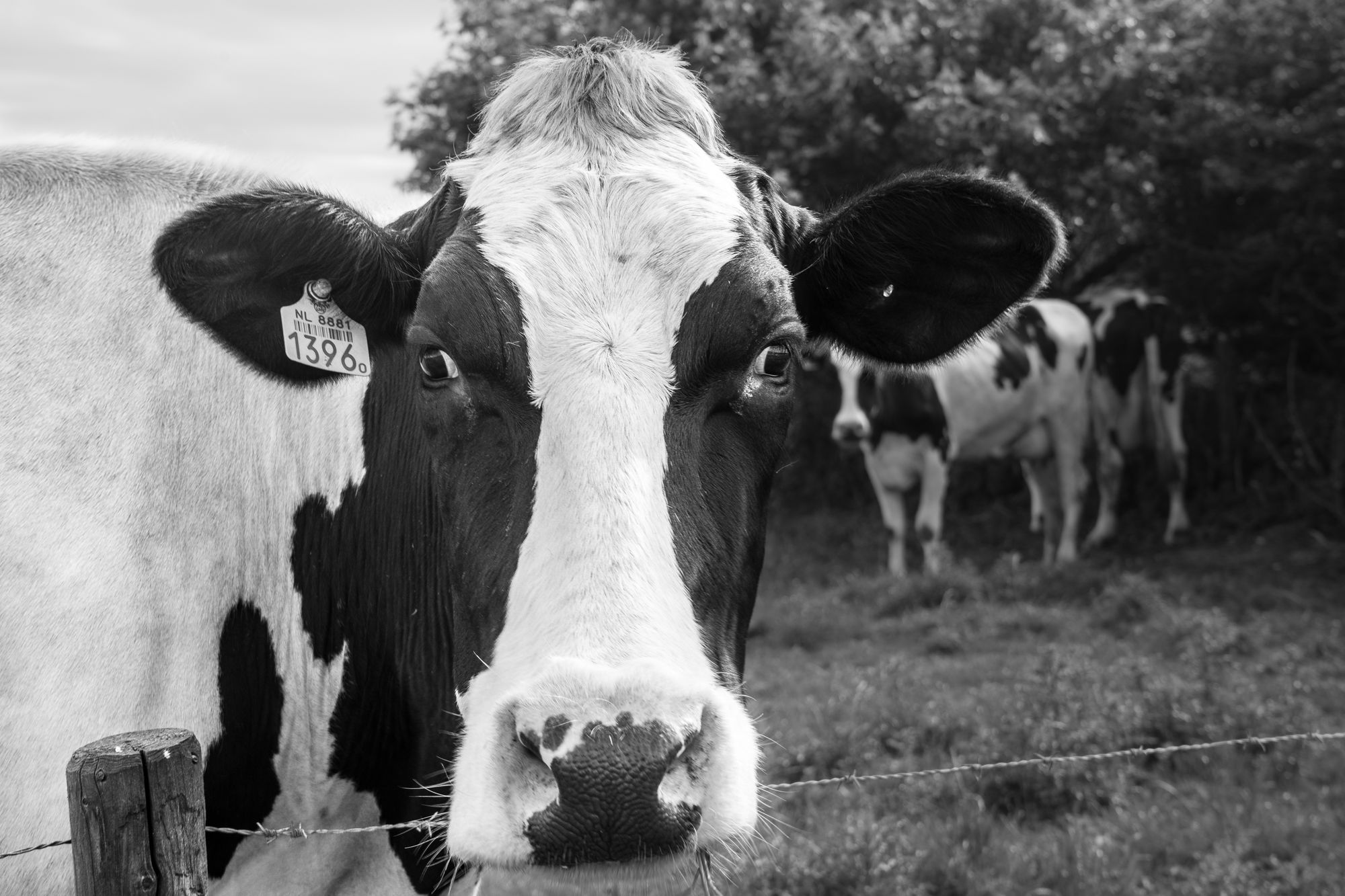 My name is Barbara, but now they call me 1396…so unimaginative…

Now let’s go to the factors to keep in mind when deciding to go vegan:

Why do you want to go vegan?

There are several reasons why you’d want to go vegan. Mine is purely to follow non-specieist ethics. Other reasons (added value, in my case) are the nutrition benefits and environmental awareness of such a diet. If you want to go vegan because you think it’s cool…well…I can’t tell you not to do that, but be aware that you have to be willing to fully embrace certain decisions and mindsets if you want to make it work.

If you stop eating meat because animals are mistreated, but you keep using animal-products, you’re not committing yourself to your principles. The production of dairy products (milk, egg, cheese) is actually much more damaging to animals than it is butchery.

Michelle’s work and watching documentaries about veganism clearly impacted my decision to follow this diet. I’ve always avoided “shocking documentaries” where they make you see how animals are treated in the food industry (SPOILER: terribly), but one documentary really made me change my mind, and I’d advise you to watch it too (not to convince you, but at least to have a more informed opinion on veganism). It’s called Speciesism: the Movie, directed by Mark Devries, and you can watch it by renting it on Vimeo or Amazon (or you know, find it in other ways). I found it nice because it tackles veganism from a very philosophical perspective rather than trying to shock you with uncensored content. Watch it!

What kind of friends do you have?

The easiest thing to do, if you want to go vegan, is to keep in touch with another person doing the same thing. You can share advice and tips. One advice that I can give you is not to post on Facebook every vegan-thing you eat, because it gets annoying to everyone ^^

In my case I was lucky enough that me and Michelle decided to go vegan around the same time (despite the fact that her thought process was much more elaborate than mine). Easier to do groceries, easier to make food, easier to share successes and failures. As you probably know, though, there are a lot of friendly people on the net, so if you need advice, you can find plenty!

The fact that I don’t live with my family helped me big times of course. My parents still feel the need to prove me wrong and try to convince me that not eating animals will make me un-healthy, but being informed about these topics help you having strong counter-arguments. At the end of the day, you are responsible for your actions and decisions.

Few days ago I was in Palermo, and I told some good friends of mine that I was vegan. The majority of them was genuinely curious and respectful; one told me “no way, I can’t stand vegans”. So yeah, this shit happens, but hey, it’s not your job to educate people.

As I said, for some years I’ve lived by making food without putting passion/effort. Egg+schnitzel, pasta with tomato sauce, instant noodles, and some great variations. I’m not a cook (and yes, not all Italians have to be good at cooking), and I mostly just want to fill my stomach as fast as I can.

The truth is that my eating habits only improved after I decided to go vegan. Now, don’t get scared because this is absolutely not necessary, but I started using the awesome Lifesum app to keep track of the things that I eat, the amount of proteins and calories I take. Turns out before doing that (when I was eating animal products) I was taking around 1000 kcal per day, which is ridiculously low. With the excuse to make sure I get enough proteins, I now get around 2400 kcal per day, and I feel super good about it. If you’re a sport-person you might like the fact that Lifesum connects to Google Fit so that you don’t have to manually add your physical activity.

This is what Lifesum tells me about what I ate yesterday. LOOKING GOOD! 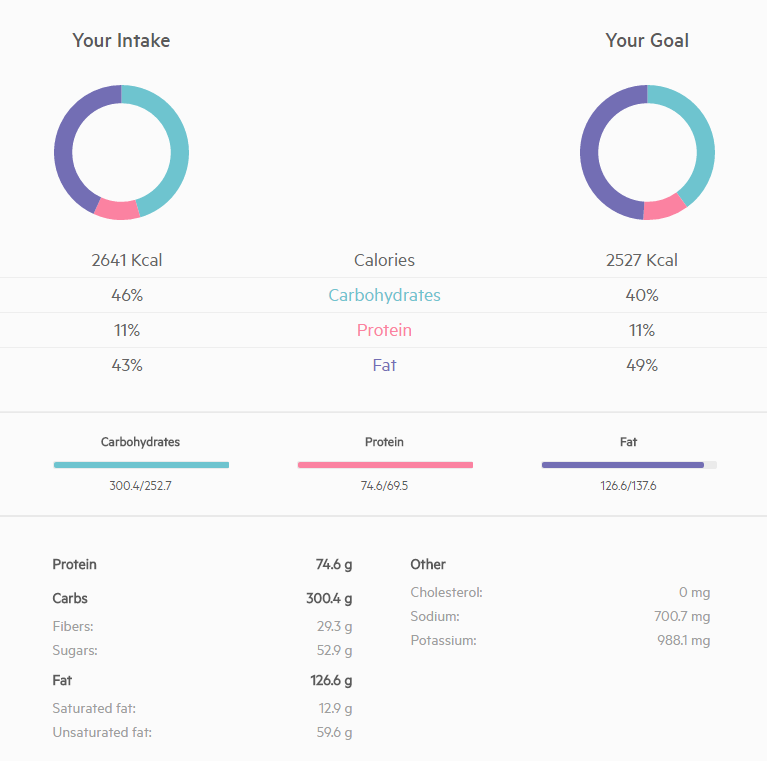 This is what Lifesum tells me about what I ate yesterday.

There are few things that you’ll usually hear about veganism (and that I used to believe as well). These things are mostly founded on uninformed opinions.

If you put a bit of love in it, the food can be really good. You’ll hear many vegans defining most of vegan things “delicious”, the truth is that vegan food is usually “just good”, and that’s alright.

At the beginning you’ll have to try few things: there are foods that try to imitate animal food which you might find disgusting, while others that are honestly really good. There’s a bit of trial and error at the beginning, but I think that’s the same for every type of food.

The fact that you’ll try to eat tasty things will force you to eat super healthy, which is the biggest added value of going vegan, in my opinion. If you still think vegan people just eat leaves and seeds, take a look at Yummly (another website that I’d advise you to use). Create a profile, add the food that you usually like, and then select Vegan from the option. You’ll get a wall full of super awesome vegan meals. On top of this, most Italian pastas and dishes are not using animal products, and the best ones are vegan-friendly (caponata, pane&panelle just to mention two of the best things you can get in life). In alternative, you can check some other good sources like this one and this other one.

…if you don’t care about animal ethics, you might want to watch the documentary I linked above. If you still don’t care, keep on following your current diet and no one will judge your choices. The most important thing, as usual, is to be respectful to each other, whether we follow the same or different principles.

If you do care about animal ethics…well…watch Speciesism anyway, and if want to go vegan, make sure you inform yourself on what things you should try and eat (even think about visiting a nutritionist before stating), and don’t forget to have your B12 and Omega-3 intake under control (your values are most likely under the norm anyway ^^).

NOTE: if you spent the entire time wondering what does the article have to do with petting cows, well, I pet a cow once. 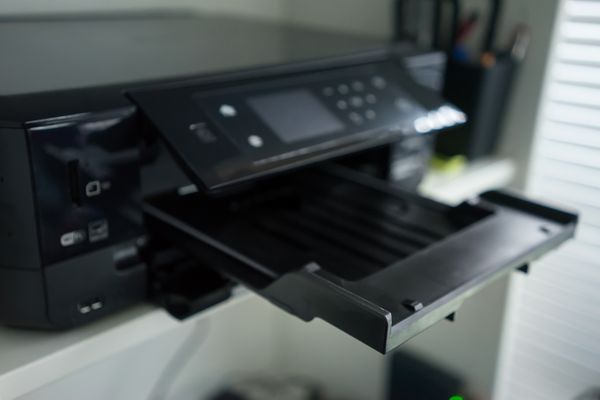 I can't believe I found an all-in-one printer that doesn't suck. I can finally print everything I want. So much power!